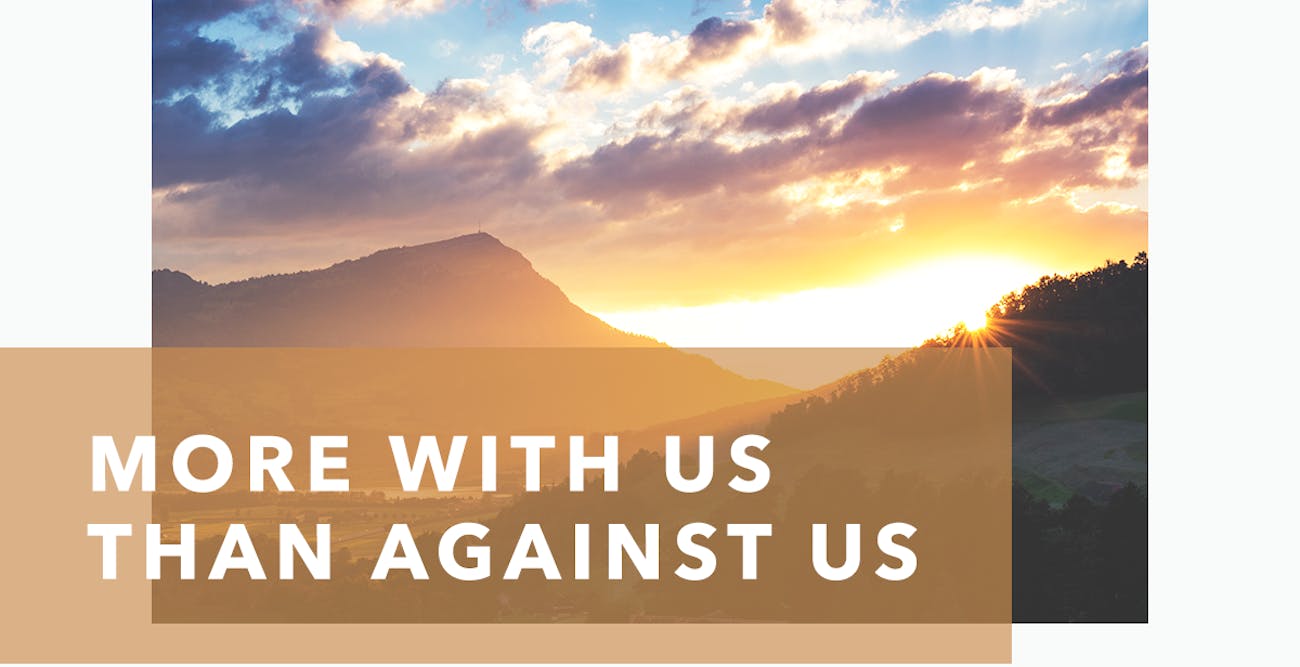 TOPIC: More with Us than against Us

In the days of the prophet Elisha, the king of Syria seized upon an opportunity to capture Elisha who was in the city of Dothan. He mobilized a great army with many chariots and horses to surround the city one night. He wasn’t prepared to take any risk of the prophet escaping.

Early the next morning in Dothan, when Elisha’s servant went outside, he saw troops, horses, and chariots everywhere. He and Elisha were completely surrounded by enemy forces intent on killing them. The servant flew into a state of panic and cried out to Elisha, “Alas, my master! What shall we do?” (2 Kings 6:15).

Put yourself in the shoes of Elisha’s servant. You (and I) would probably have been filled with fear too. But here’s where I want you to pay close attention, because there is a powerful truth I want you to catch. Without faltering, Elisha calmly told his servant, “Do not fear, for those who are with us are more than those who are with them” (2 Kings 6:16).

I can just imagine how the servant must have felt. There was absolutely no logic in what Elisha had just said. There were just the two of them against a whole army! Had his master gone mad?

Before the servant could work himself into an even greater panic, Elisha prayed a simple prayer: “Lord, I pray, open his eyes that he may see” (2 Kings 6:17). And the Lord opened the eyes of the servant. Then he saw that the hillside all around them was filled with blindingly magnificent horses and chariots of fire. God’s army of angels was flanking them on every side, ablaze with the glory, beauty, and majesty of the Most High. As the servant marveled, he realized that the Syrian forces were utterly dwarfed by the angelic army.

Why had the young servant been fearful while Elisha was fearless? The answer is this: They saw different things. The young man saw the great Syrian army. But Elisha saw an even greater angelic army on chariots of fire. Elisha had spiritual insight.

My dear reader, would you commit the above Scripture to heart? If you are in a constant fight with fear, meditate on this Scripture and fortify your heart with this promise. Whether you find yourself besieged by debts, attacked by what doctors call a terminal illness, or constantly anxious over the safety of your children, remember this powerful verse. The God of angelic armies is with you. No weapon formed against you shall prosper (see Isa. 54:17)!

This devotional is adapted from The Prayer of Protection Devotional. Find out more about the book here.

Joseph Prince Devotional 24th February 2021 Today’s Message – Joseph Prince (born 15 May 1963, Singapore) is the senior pastor of New Creation Church in Singapore, one of Asia’s biggest churches. He was one of the church’s founders in 1983