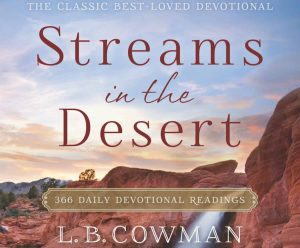 Streams in the Desert Devotional 17th May 2021 Monday Message

And when forty years were expired, there appeared to him in the wilderness…an angel of the Lord…saying….now come, I will send thee into Egypt – Acts 7:30-34

Often the Lord calls us aside from our work for a season, and bids us be still and learn ere we go forth again to minister. There is no time lost in such waiting hours.

Fleeing from his enemies, the ancient knight found that his horse needed to be re-shod. Prudence seemed to urge him on without delay, but higher wisdom taught him to halt a few minutes at the blacksmith’s forge by the way, to have the shoe replaced; and although he heard the feet of his pursuers galloping hard behind, yet he waited those minutes until his charger was refitted for his flight. And then, leaping into his saddle just as they appeared a hundred yards away, he dashed away from them with the fleetness of the wind, and knew that his halting had hastened his escape.

So often God bids us tarry ere we go, and fully recover ourselves for the next stage of the journey and work. —Days of Heaven upon Earth

Waiting! Yes, patiently waiting!
Till next steps made plain shall be;
To hear, with the inner hearing,
The Voice that will call for me.

Waiting! Yes, hopefully waiting!
With hope that need not grow dim;
The Master is pledged to guide me,
And my eyes are unto Him.

Waiting! Expectantly waiting!
Perhaps it may be today
The Master will quickly open
The gate to my future way.

Waiting! Yes, waiting! still waiting!
I know, though I’ve waited long,
That, while He withholds His purpose,
His waiting cannot be wrong.

Waiting! Yes, waiting! still waiting!
The Master will not be late:
He knoweth that I am waiting
For Him to unlatch the gate.
—J. D. Smith

Streams in the Desert Devotional 17th May 2021 Message. L. B. Cowman worked as a pioneer missionary with her husband in Japan and China from 1901 to 1917, during which time they helped found the Oriental Missionary Society. A powerful collection of meditations, Christian writings, and Scripture that inspire fresh hope, confidence, and deep awareness of God’s presence in your life.

Rhapsody of Realities 17 May 2021 - Understanding The Spirituality of Life